What is Corporate Film and why is it such an effective communication tool?

Corporate film is an umbrella term that refers to any type of video communications commissioned by a business for internal and external messaging.


I think we all understand the corporate bit, provided you’re A) reading this and B) have a LinkedIn account. You could say, your business is our business – and what we do as corporate film specialists not only gets under the skin of what you do (in a good way), but helps you and your business communicate the things you really want to shout about – be it internally or externally – in a streamlined, widely appealing and cost-effective way.

‘Viewers are 95% more likely to remember a call to action

after watching a video’ (Forbes)

You could also say corporate film is a very different beast from what it was just 10-15 years ago. The lines are blurring between high-end broadcast-worthy content and what’s achievable with a (comparatively) small crew, a lightweight camera set-up, a veritable hotbed of creativity and people who just ‘get it’. In fact, the term ‘corporate video’ is also dying out to some degree: not only does it have connotations of a bygone era, stereotyped by cheap productions and bad presenting skills, but it’s true to say the world of VHS and modest video cameras has long since given way to a much more robust and quality-driven medium. ‘Video’ makes me think 80s and 90s, DVD makes me think 00s, but ‘Film’ has this eternal aura of something that will mesmerise, engage and make you think – even if the term massively pre-dates the others! 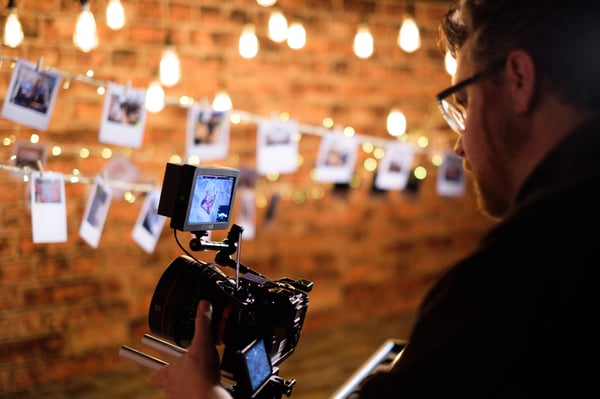 Of course, a corporate film can be all kinds of things: a company promo, a values showcase, a CEO message, a product commercial, a learning & development guide, a brand campaign, a magazine programme, a scenario-based drama, or a highlights reel of an event or exhibition. And yes, it can be a health & safety film too – which considering how 2020 is going so far, is sombrely still as relevant as ever. Having ‘directed’ a least one sequence of someone washing their hands for 30 seconds in the long-forgotten past, my mild scepticism at the time has certainly and drastically changed! Anyway, I digress.

Corporate film has so many different faces and incarnations, that one often forgets just how powerful it can be. Since social media took the world by storm, (and continues to do so with ever-evolving platforms, channels and global audiences) film/video – along with the power of the still image – rules the roost in terms of what’s shareable, visually arresting and drives home a message quickly and memorably. Whether you’re browsing through YouTube, Facebook or Instagram, you can’t get away from it and businesses have increasingly latched onto its potential. All you have to do is swap the likes for tangible R.O.I. and bingo.

Don’t forget, the majority of the same rules apply internally – after all, your internal brand should be just as strong as your external one. And though it will likely need to be targeted specifically to the business needs and vision of your organisation, video content should be built to cut through and connect with its intended audience, regardless of its context.

In that very sentence, lies a hint of the two most important things behind an effective corporate film:

Here is an example of a corporate video we produced with a strong message and sensitive content where understanding the audience was key:

Yes, we provide the creativity and technical flair that combines  those things together seamlessly, but without us the filmmakers – and you, the clients – first considering (very carefully!) the message you want to get out and the people you want it to engage with, then we end up with something called a waste of time and money.  For more info on effective corporate film content, check out our blog on top tips on scriptwriting for corporate film.

We understand these things, not because we know your business better than you, but because we understand what works, what cuts through the noise, and how to bring a message (that may or may not be dry!) to life on screen. In our world as a video production agency, we live and breathe producing, writing, directing, camerawork, editing, sound design and so much more: all of which come under the magic umbrella term of ‘creative storytelling’.

Tell me a fact and I’ll learn. Tell me a truth and I’ll believe.

Ok, we’re realists: we don’t expect the films we make for you will last an eternity. But one thing we can promise is they’ll connect with your people, make them think differently, and set the standard for how you communicate going forward. We also know from experience it’s a medium that delivers on its investment time and time again. We even have the stats to prove it.

It turns out that a corporate film is actually hard to identify because it has almost limitless potential. Though think of it like this and it becomes a no-brainer: humans are biologically wired to understand stories and respond to dynamic visuals. And in times of great uncertainty, and in times of great stability, a powerful corporate film will inspire your people, build trust, strengthen your brand and become a communication tool that you’ll want to use again and again.

Previous Post Why use a video production agency?  Next Post Top Tips for Appearing in Corporate Videos